A dream fulfilled has a starting place according to Sally.

Many visitors come to the World War II Memorial in Washington, DC.

“I don’t want that job. I learned good skills while I was in the CCC’s that will help me find another higher paying job.”

Ben recently returned home from a year with the Civilian Conservation Corps (CCC). This was an agency created during the depression years in the late 1930s to help young men from disadvantaged families find work. He learned about the lumber business while clearing forests in California.

“Don’t be silly, “Sally laughed. “I meant that this would be a good starting job for me. I want to be a newspaper reporter when I group up.”

“You’re the silly one!” Ben stared at Sally and leaned against the kitchen counter. “Newspaper work is not for girls. You should concentrate on learning how to cook and clean the house.

Sally didn’t want to argue with Ben. After a few moments of silence, she tried a different approach to her idea of a dream fulfilled.

“I’m planning to give Mom a surprise birthday party next month. I want to bake a chocolate cake and give her silk stockings as a present.” She readjusted her hair net around her long wavy auburn hair.

“So?” Ben shoved his hands in his pockets. “We can add the items to our shopping list next week.”

“Ben, those items are very expensive,” Sally sighed. “Chocolate, sugar and silk stockings are on the ration list. I can earn money as a newspaper carrier to pay for them.”

“I’ll discuss the matter with Mom and Dad when they come home,” Ben said.

Ben had been left in charge of the household until their parents returned home from visiting their aunt in New York City.

Sally grabbed Ben’s arm. “I know I can do this. Please let me try.”

“Sally, what do you think Mom and Dad would say?” Ben scratched his head.

“I don’t know.” Sally looked down at her slippers feeling sad that suddenly a dream fulfilled might not happen.

“Alright, you can try.” Ben went along with Sally’s idea.

“Thanks, Ben.” She hugged her brother and ran out the kitchen door eager for a dream fulfilled to happen.

One step closer to a dream fulfilled

Later that afternoon Sally breathed deeply and pushed open the Circulation Editor’s outside office door. The secretary was typing and talking on the phone. Sally noticed that the office chairs were upholstered with blue chintz. The same shade of light blue as her best dress that she was wearing.

“I’m here to answer the ad in today’s paper about newspaper carriers.” Sally said to the secretary after she hung up the phone.

“Mr. Cole told me to send anyone interested in applying for the position in his office. You may see him now.”

“Mr. Cole told me to send anyone interested in applying for the position in his office. You may see him now.”

People love to take photographs of this memorial in remembrance of an important time in American History.

“Thank you.” Sally entered the Circulation Editor’s office. Mr. Cole raised his eyebrows as she entered.

“I’m sorry. I don’t have any more vacancies for that position, “Mr. Cole said coldly.

“But the ad was posted yesterday for a number of openings.” Sally shoved the ad across Mr. Cole’s desk.

“Young lady, I know what the ad says. I wrote it.” Mr. Cole said loudly. “I am sorry, but you don’t fit the qualifications that I am looking for.” Mr. Cole lowered his voice trying not to show his anger.

“What qualifications are those?” Sally played with her heart shaped necklace.

“I need someone who can lift a stack of papers and add and subtract quickly in his head. I’m also looking for someone with a deep, loud voice. Someone not afraid of getting his hands dirty. Do you fit this description? I don’t think so. I’m sorry. My secretary will show you the way out.”

Sally was surprised and shocked to hear Mr. Cole’s response. His words hurt. She was a straight A student in her math classes. Lifting a lot of papers couldn’t be that hard. She lifted furniture at home when she helped her mother vacuum and straighten out the living room and bedrooms. She could shout loudly and wasn’t afraid of dirty work.

She took a deep breath to regain her composure. After she calmed down, she thought about how she would respond to Mr. Cole. She was determined not to leave his office until he agreed to give her a chance at the newspaper carrier position.

“Mr. Cole, I know I can do this job. Please give me a chance.” Sally unclenched her fist and folded her hands in front of her. “I helped my older brother plant vegetables in our victory garden last spring and took care of the garden while he was in California. I’m on the math honor roll in school.”

“Many people plant victory gardens and are good at math.”

Mr. Cole ignored Sally’s request. He looked down at the paperwork on his desk. He picked up a pen and made some notes. He seemed to forget that Sally was still in his office.

Since she didn’t get the response from Mr. Cole she was hoping for, she turned around and shuffled slowly toward his office door. She thought of an idea she could try. She was determined to achieve a dream fulfilled.

She turned around and cupped her hands over her mouth. “Read all about it.” Sally shouted in a loud deep voice.

Mr. Cole looked up from the stack of papers on his desk and jumped up out of his seat when he heard Sally shouting. His frown turned into a smile.

“Alright. My regular boys don’t want to work on Sundays. I’ll need someone for tomorrow at 8:30 am. I’m willing to give you a chance to show me what you can do. Be on time.” Mr. Cole took off his thick rimmed glasses and stared at her.

Mr. Cole sat down and returned to the stack of papers on his desk after Sally left his office eager for a dream fulfilled to begin.

On the path to a dream fulfilled

Sally rose early the next morning and put on a red plaid shirt and blue corduroy pants. Her stomach growled. She ate three spoons of shredded wheat and couldn’t eat any more. She breathed deeply while she rinsed off her breakfast dish. She heard Ben’s footsteps behind her.

“You’re up early for a Sunday morning.” Ben sat down and poured cereal into his bowl.

“Mr. Cole is giving me a chance to be a newspaper carrier for the day.”

“So?” Ben shrugged his shoulders.

On her way she stopped at a neighbor’s house. “I’d like to borrow your wagon and toy megaphone,” she said to the small boy who answered the door.

“Okay,” he replied. Sally was one step closer to a dream fulfilled.

She hoped her plan would work. Sally arrived at the newspaper before 8:30 am pulling the bright red wagon containing the megaphone with her right hand. She noticed that the bin containing papers for sale was empty. Sally walked down a dimly lit corridor and asked a man who was setting type why the newspapers hadn’t been placed in the for-sale bin. The typesetter explained that the papers had been withdrawn for a special edition printing.

Sally waited for a stack of papers to be printed. When the papers were ready, she glanced at the headline. She couldn’t believe that the Japanese had unexpectedly dropped bombs on Unites States naval ships in Pearl Harbor, Hawaii. Could this mean war? Would Ben join the navy? He had already talked about what he would do if the United States entered the war in Europe. Sally wondered if she should go home and talk to Ben about this. She looked at the stack of newly printed newspapers again. Would a dream fulfilled not happen?

“What are you waiting for?” the typesetter asked. “These papers are ready to be sold.”

Sally brushed her teas away with her right hand. She had work to do. Sally filled her wagon with a stack of freshly printed newspapers and went outside to her assigned corner.

“Read all about it. Japanese bomb Pearl Harbor. Does this mean war?” 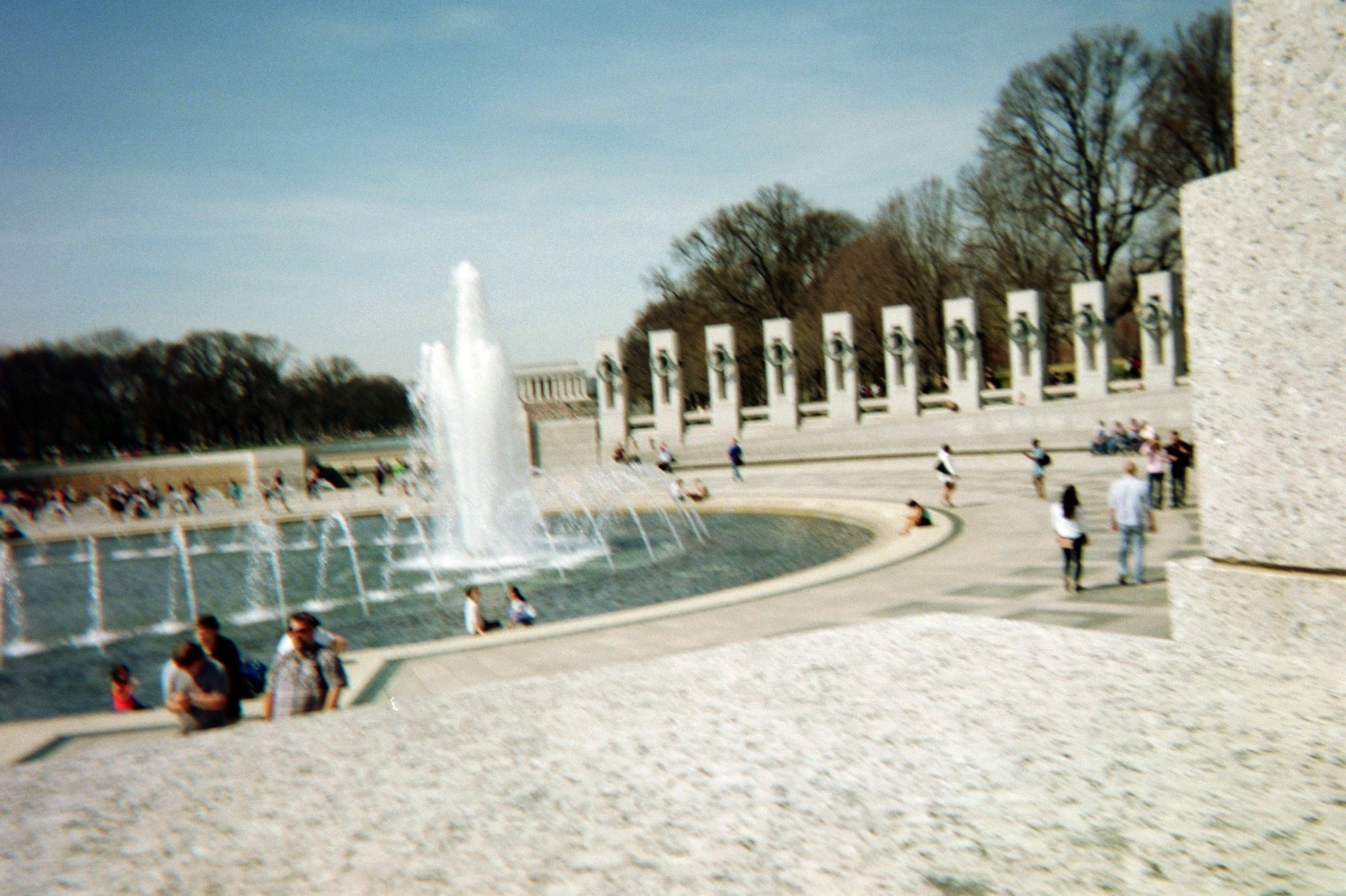 This memorial commemorates those Americans who served in World War II after the Japanese attacked naval ships in Pearl Harbor, Hawaii.

As Sally shouted through the megaphone, a small crowd gathered at her corner. Sally listened to bits and pieces of their conversation. Some were concerned about their sons or brothers. Some of the older men talked about their experiences in World War I. A few laughed thinking that the newspaper had made a mistake and it was a prank. Others wanted to know more and bought several copies of the Sunday special edition.

“The special edition of our newspaper today with the headline attracted the attention of many.” Mr. Cole looked down at her empty red wagon. “I expected all the papers to be sold out today. However, you sold more than any other carrier on the first day. Would you be interested in a permanent position as a newspaper carrier?”

She walked home secure in the knowledge that her mother was going to have a wonderful birthday party. She was excited to begin her newspaper career. A dream fulfilled happened that day.

Here is an article for kids about working women during World War II.

You can read more about the attack on Pearl Harbor in 1941 at the Naval History and Heritage Command website.