Mobile history delves into the beginnings of mobile phones

Mobile history traces the evolution of the mobile phone from the beginning of the last century until today. Over time, mobile phones developed the capability of sending and receiving wireless phone calls. What are mobile phones provides historical background. 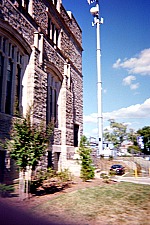 Voice and data cellular communications networks have been installed at various locations all over the world by major telecommunications providers.

The mobile history timeline traces the evolution of the smartphone in the 21st century.

Who were some early mobile phone inventors?

What are the mobile phone generations?

Mobile history covers the development of the mobile phone beginning with the first generation to the fourth generation. Read more in technologies for mobile communication.

A cellular network's last link is wireless and is distributed over land areas called cells. Each cell area is served by at least one permanent transceiver, also known as a base station. The base station sends voice and data signals to individual cells. Cellular mobile communications explained.

Who is featured in cell phone tower?

Computer history prior to mobile phones

Today, modern computers are smaller. The Digital Era has paved the way for mobile phones.

The three generations of the Internet, Web 1.0, Web 2.0 and Web 3.0 are explained in business Internet.

What is mobile commerce?

How is mobile commerce used?

What will mobile phones look like in the future?

Today mobile phones have the most power, the highest image resolution, the most pixel-rich screens, the highest memory capacity, the fastest processors and WiFi. They run mobile operating systems and support downloadable applications. New smartphones with bigger screens also come with a bigger price tag.

While there might not be free mobile phones in the future, it is certain that the evolution of mobile technology will change education. One in three schoolchildren will benefit from having access to smartphones with camera and voice recorder phones. Utilizing the multi-functional nature of these portable devices as both learning and teaching tools could become the new normal in K through 12 education. The increasing availability of higher quality inexpensive camera phones will enable both children and teachers to take photos and retain notes while on field trips. A more active and informal approach to learning will evolve because of these high tech developments in the classroom.

Joshua Bell, an anthropologist and curator of globalization at the Natural History Museum in Washington, D.C., is currently developing a new exhibit tentatively called “A Natural History of the Mobile Phone” that explores mobile history. He has offered some ideas on what he perceives will be the future for mobile phones.

“Open-source is the only way to have a redemptive future with our technology – not only to even out its unevenly-distributed nature, but so that we can work to create better devices,” says Bell. He believes that open-source technology will promote democracy, connect people with one another around the world and influence how new smartphones will be improved in the future.

Joshua Bell has been following the work of cell phone repair technicians in the Washington, D.C. area. He believes we can learn from their insights that are sparking innovative ideas on how to manipulate mobile phone devices manufactured by larger corporations. Bell envisions a future when we will all be “hackers” in one way or another. He thinks that one day anyone will be able to make upgrade changes to the technology we currently own instead of continuing to spend money to purchase newer models when they appear in the marketplace.

It is interesting to discover how rapidly mobile history has changed mobile phone technology from the earliest wireless telephone in 1908 to the latest 5G technology of today.