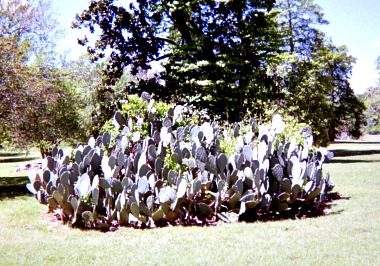 This cactus plant might be companred to COBOL "spaghetti code".

A Web Form is any Web page containing ASP.NET code within the HTML tag structure. The creation of ASP.NET Web Forms facilitates the use of newer ASP.NET controls within the body of the HTML document. The main advantage of this is that content may be created for the form before the form is returned to the browser. This content may be generated from anywhere in the ASP.NET code. Mobile phones run applications created using ASP.NET Web Forms.

ASP.NET Web Forms introduced the concept of a server-control providing direct links to processes in the middle-tier’s code-behind modules. It eliminated the need for front-end code to perform this function. This encouraged developers to adopt a more structured approach to the interaction between the front-end and the middle-tier. However, this construct was not successful in preventing developers from dumping all the sloppy coding that was stored in the front-end of “Classic ASP” applications in the code-behind modules.

Spaghetti Coding” was one of the original complaints against “Classic ASP” that was used to attack ASP.NET Web Forms. However, this had very little to do with ASP.NET.

“Spaghetti Coding” is reminiscent of the days when structured programming replaced the unorganized and unstructured COBOL code that was also termed “Spaghetti Code”.