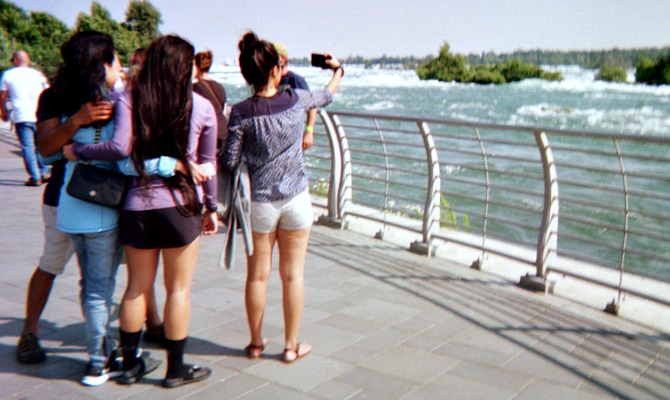 The Martin Cooper cell phone invention made it possible for this young woman to take pictures of Niagara Falls with her smartphone.

Originally from Chicago, Martin Cooper served in the United States Navy during the Korean War. He has a master’s degree in electrical engineering from the Illinois Institute of Technology. Martin Cooper joined Motorola in 1954 after a brief period at Teletype Corporation, an arm of AT&T.

While at Motorola, Cooper’s future bosses required him to solve problems like the minim bit rate for digitizing a sine wave. He worked out the problem in front of them using a chalkboard. Martin Cooper’s mentor at Motorola, John Mitchell, passed down to him the idea that personal communications was going to be important. This understanding evolved from the marketplace for two-way radios. The technology behind portable phones had been part of Martin Cooper’s dreams for years. However, only three months passed from the time he conceived of a portable phone and until the portable phone was demonstrated.

Laying the ground work for the cell phone

In 1947, a Bell engineer, Doug Ring, and his boss, Rae Young, wrote a memo describing cellular technology. AT&T decided the time wasn’t right for cellular, but in the ‘50s, Bell introduced a pushbutton analog phone system for cars. At 12 years old, Martin Cooper’s future wife worked for a common carrier providing that service. This first mobile telephony service was terrible.

During the interview, Martin Cooper explains cellular technology. He said that a cell is a base station connected to other base stations and to the pubic switched network. When a user moves from one cell to another, the call is transferred from one radio channel to another. This is called “hand-off” and the concept originated with Rae Young. The actual switching logic was developed by Amos Joel at Bell Labs.

In 1969, AT&T said they were ready to introduce cellular technology. However, AT&T didn’t think there was a large market. Their cell phone service market consisted of about two million car phones, an elite service only a few people would want.

Martin Cooper’s vision was for people to experience the freedom of communicating anywhere any time. In November 1972, he called Rudy Krolopp, who had designed the first national pagers. Martin described his idea and said that he wanted for the April demonstration. Rudy Krolopp’s response, “What’s a cell phone?” The idea for the Martin Cooper cell phone was born.

Two weeks after Rudy Krolopp assigned his team to design the phone, Martin Cooper took them out to dinner. The team presented their handmade models. These were a flip phone, a slider phone, a lozenge phone and the other one looked like a shoe. By March 1973, the team had a working phone. The Martin Cooper cell phone had to make and receive calls to and from other phones.

Martin Cooper demonstrated his new cell phone in front of a radio journalist out on the streets of New York City. In the interview Martin Cooper said, “We had two cell sites, one near Central Park and one on Wall Street. I decided to call Joel Engel at AT&T. I happened to have his office number on a piece of paper.”

Martin hadn’t tested the cell phone, so he didn’t know if it would work. He called Joel Engel and Mr. Engel answered the phone call.

“I’m calling you from a cell phone – but a real cell phone, a personal, handheld, portable cell phone.”

No response on the other end. Martin said that Joel didn’t remember the call. Martin remembered that Joel was polite. 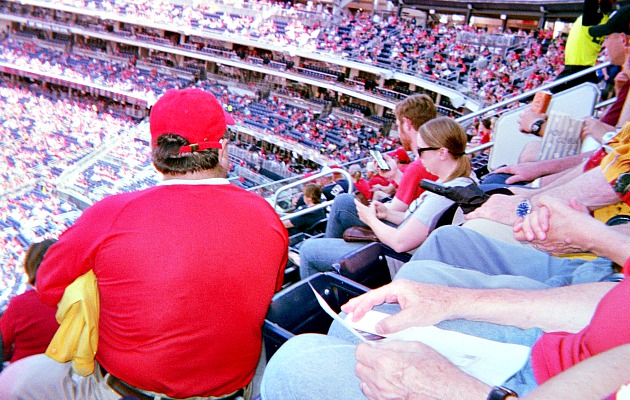 Are these baseball fans too busy looking at their smartphones to talk to one another about the baseball game they are watching?

The story ran all over the world. However, the cell phone wasn’t available for purchase on the market until ten years later in 1983. The technology wasn’t ready. Between 1973 and 1983 Martin Cooper and his team built at least four versions of the phone, he named the “Dyna TAC.” Each version produced was smaller and came closer to the manufacturing process.

Motorola wanted to promote a prototype of a Martin Cooper cell phone before producing an actual product to give the Federal Communications Commission (FCC) and Congress a picture of the future. Motorola wanted to stop the AT&T monopoly in the telecommunications industry. The AT&T executive, Joel Engel, received the impression that Motorola was really good at public relations stunts.

Martin Cooper’s vision was that everybody was going to have a cell phone. Motorola would be the company to produce those phones. There is a patent issued to Cooper et. al. that integrates all the ideas his team worked on into one patent.

What's next for the cell phone?

According to Martin Cooper, “Technology is the application of science to create products and services that make people’s lives better. If you leave out people, it’s not technology. The future for the cell phone service is personalization and customization. This means that the products that make our lives easier should account for the fact that everyone is unique.”

He shared his thoughts on what the Martin Cooper cell phone would look like in ten years. He thinks that the cell phone will become what he calls a server. He uses medicine as an example to explain his meaning. “One aspect of medicine is understanding what’s going on in your body. To understand you have to measure. How do you measure unless you have devices measuring? And measurements have no function unless they accumulate where somebody can do something about them. So, the cell phone now is the medical server…”

Martin also thinks that the phone will be connected to a virtual reality device. Kids will be playing what they think are games but really are getting an education. The cell phone will become an educational device in the future.

According to Marty, “It’s a marvelous achievement. There are seven radios in a cell phone, each independent, with different functions. There’s a supercomputer. They claim that eventually there will be enough power in a cell phone to do all your computing, for a big screen, you’ll plug into a docking station.”

He continues, “Technology does disrupt. Technology screws up a lot of people and things. But ultimately, technology saves the world. Yeah, there are bad aspects of the phone but we’re going to work them out. The biggest problem in the world today is people not talking to each other.”

Martin Cooper left Motorola the year the cell phone reached market. He started his own company called Dyna LLC. In the past decade, Martin has received several honors, including the Marconi Prize, which recognizes exceptional contributions to communication, the Charles Stark Draper Prize from the U.S. National Academy of Engineering, and top billing in a 60 Minutes segment, “Marty Cooper’s Big Idea.”

Marty Cooper founded Dyna LLC with his wife, Arlene Harris. Harris, whose family worked in telecommunications, started a second company with Cooper, GreatCall, which creates technology for seniors. One product is the Jitterbug, a no-frills cell phone with oversized buttons. His wife said, “I’m 20 years younger than Marty and I have trouble keeping up with him.”