Niagara Falls, the Niagara River and the entire Great Lakes Basin of which Niagara Falls is a part, is a legacy of the last Ice Age. Close to 18,000 years ago, southern Ontario was covered by ice sheets two to three kilometers thick.

As the ice sheets advanced southward, they carved out the basins of the Great Lakes. The large amount of melting water from these iced sheets filled these basins. This water is “fossil water.” Less than one percent of it is renewable annually. The rest is left over from the ice sheets.

Niagara Falls was formed more than 12,000 years ago at the end of the Ice Age. As the ice retreated northward, its meltwaters began to flow down through what is now Lake Erie, the Niagara River and Lake Ontario. The final destination of the melting water was the St. Lawrence River and the Atlantic Ocean.

There were originally five spillways from Lake Erie to Lake Ontario. Eventually these were reduced to form the original Niagara Falls at the long steep slope at Queenston-Lewiston, New York. From here the Falls began its steady erosion through the bedrock.

Eventually, the force of the water wore away the rock layers and Niagara Falls moved upstream, reaching its present location. Year after year, the formation continues with the annual freezing and thawing of the Niagara River, along with gradual erosion and periodic rock-falls. Remedial work has been completed to preserve the Falls and the volume of water has been reduced by diversion for hydroelectric power.

The first humans arrived in the Niagara Region almost 12,000 years ago. These Native Americans were most likely the first people to behold the power of Niagara Falls. The land was different then, consisting of tundra and spruce forest.

During this time (the Paleo-Indian Period, which lasted until 9,000 years ago), Niagara was inhabited by the Clovis people. These nomadic hunters most likely camped along the old Lake Erie shoreline, living in simple, tiny dwellings. Only chipped stones remain to remind us of their existence. These large, fluted projectile points were used to hunt caribou, mastodons, moose and elk. 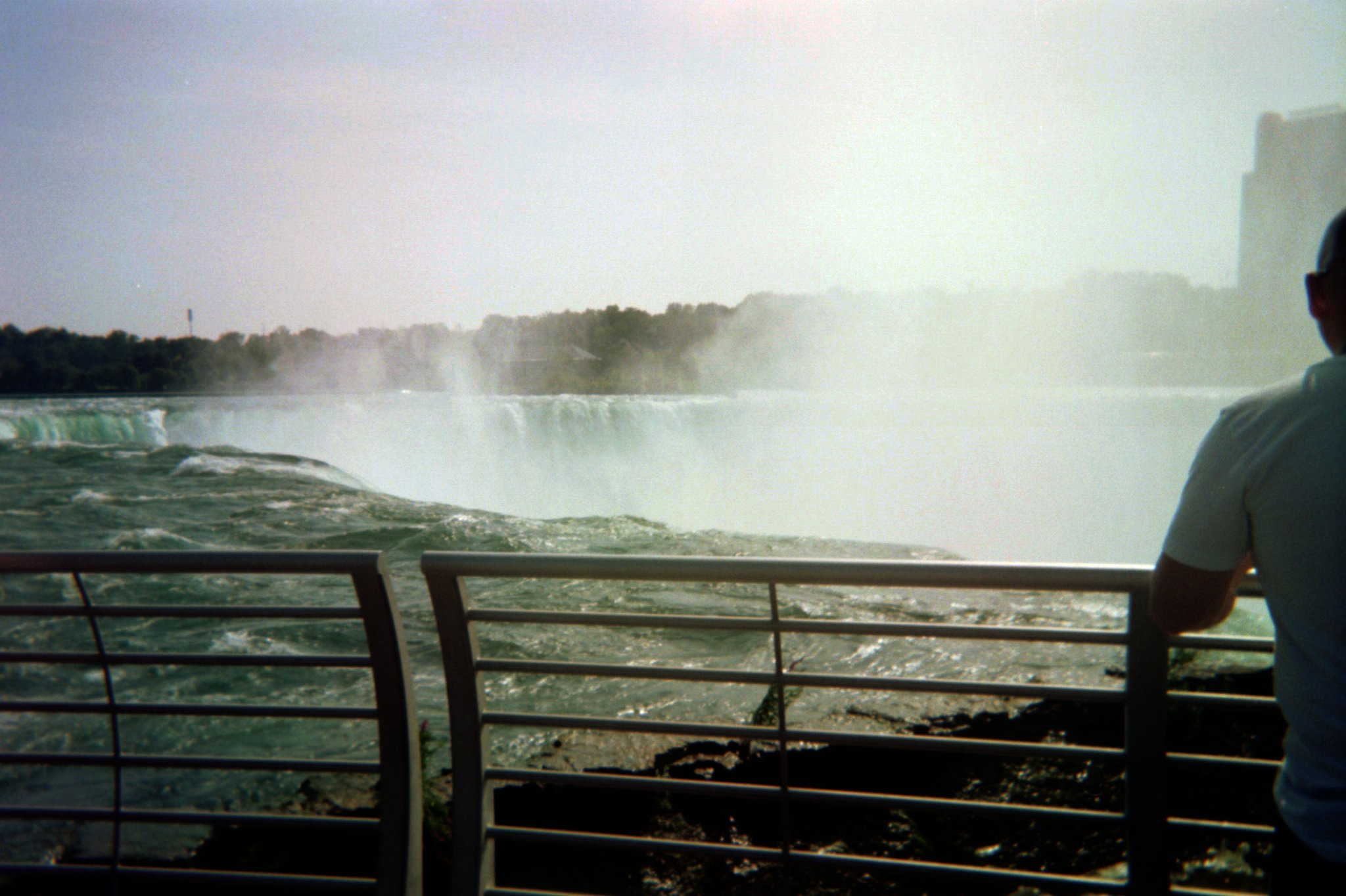 The waters of Niagara Falls descending downward in a crater.

Glacial meltwater created Lake Erie around 10,000 years ago. This water was already flowing through the Niagara River. By 9,500 years ago, a deciduous forest covered southernmost Ontario.

This forest supported the hunter-gatherers of the Archaic Period (9,000 to 3,000 years ago) with a diet of deer, moose, fish and plants. Small groups hunted in the winter, feeding on nuts and animals attracted to the forest. Larger groups came together during the summer, setting up fishing camps at the mouths of rivers and along lakeshores.

About 5,500 years ago, the meltwaters were once again routed through southern Ontario, restoring the river and the Falls to their full power. Then the Falls reached the Whirlpool. It was a brief and violent encounter, a geological moment lasting only weeks, maybe even only days.

The Woodland Period lasted from 3,000 to 300 years ago. This was the peak of Iroquois culture in southern Ontario. Corn, bean and squash agriculture provided the main sources of food.

The Iroquois had time for other pursuits and the population grew. Small palisaded villages were built. Nuclear or extended families occupying individual longhouses. During this period, burial rituals and ceramics were introduced to Ontario. Society became more complex with a political system based on extended kinship and inter-village alliances.

When the European explorers and missionaries arrived at the beginning of the 17th century, the Iroquoian villages were under the direction of various chiefs elected from the major clans. In turn, these villages were allied with powerful tribal confederacies.

Many people come to view Niagara Falls every year.

Niagara Falls was discovered by French explorer, Father Louis Hennepin in December 1678. This Recollet priest published the first engraving of the Falls in his book Nouvelle Decouverte nineteen years later.

The region soon became a French stronghold. Forts were built at the mouth of the Niagara River to control access to the Great Lakes. One fort was restored between 1926 and 1934. This fort is now present-day Old Fort Niagara. Today, this 18th century fort offers daily exhibitions including live reenactments and demonstrations.

In 1812, by request of President James Madison, the United States Congress declared war on Canada. The War of 1812 was a turning point in Niagara Falls history, when the fledgling United States army fought British Loyalists for the new lands that would become Canada.

Niagara historical sites, battlefields, museums and military re-creations are available to visitors to help remember past events. Tourists can also view artifacts from that war and monuments erected later such as the one dedicated to Sir Isaac Brock, a British General who lost his life at the Battle of Queenston in 1812.

Recently, the skeletons of members of the United States Army were found near Old Fort Erie. At Fort Erie, authentically dressed guides in 1812 period costumes re-create life in this former British garrison. Exhibitions include daily musket demonstrations and the annual Siege of Old Fort Erie Re-enactment.

Fort Erie was an entry point for freedom-seeking black slaves escaping persecution in the United States. The point of entry into Canada from Buffalo, was known as “The Crossing”. It was the start of the Freedom Trail that was part of the Underground Railroad.

Niagara has the most complex transportation history of any area in North America. The first Welland Canal was completed in 1829. Between 1849 and 1962, thirteen bridges were constructed across the Niagara River Gorge. Four of them remain.

The roadway between Niagara-on-the-Lake and Chippawa was the first designated King’s Highway. The first stage coach in Upper Canada operated on this roadway between the late 1700s and 1896. The first railroad in Upper Canada opened in 1841 with horse-drawn carriages running between Chippawa and Queenston. In 1854, steam engines powered the trans that ran along the railroad. The railroad was relocated to serve what was to become the Town of Niagara Falls.

Niagara Falls is a city in the Regional Municipality of Niagara in southeastern Ontario, Canada. It is a port on the Niagara River opposite Niagara Falls, New York. The city overlooks the Horseshoe, or Canadian, Falls cataract of Niagara Falls. The crescent-shaped cataract is 54 M (177 ft.) high and carries nine times more water than its United States counterpart.

The City of Niagara was the birthplace of hydroelectric power. In 1896, Nikola Tesla developed the alternating current system. This allowed for the transmission of power generated along the Niagara River to homes and businesses. The City of Niagara serves as a major source of electricity for Ontario.

Tourism travel to the Falls began in 1820s and within 50 years had increased ten-fold to become the area’s dominant industry. The use of boats declined as tourists increasingly chose to visit Niagara by automobile, bus or train. Niagara Falls is a popular tourist destination. 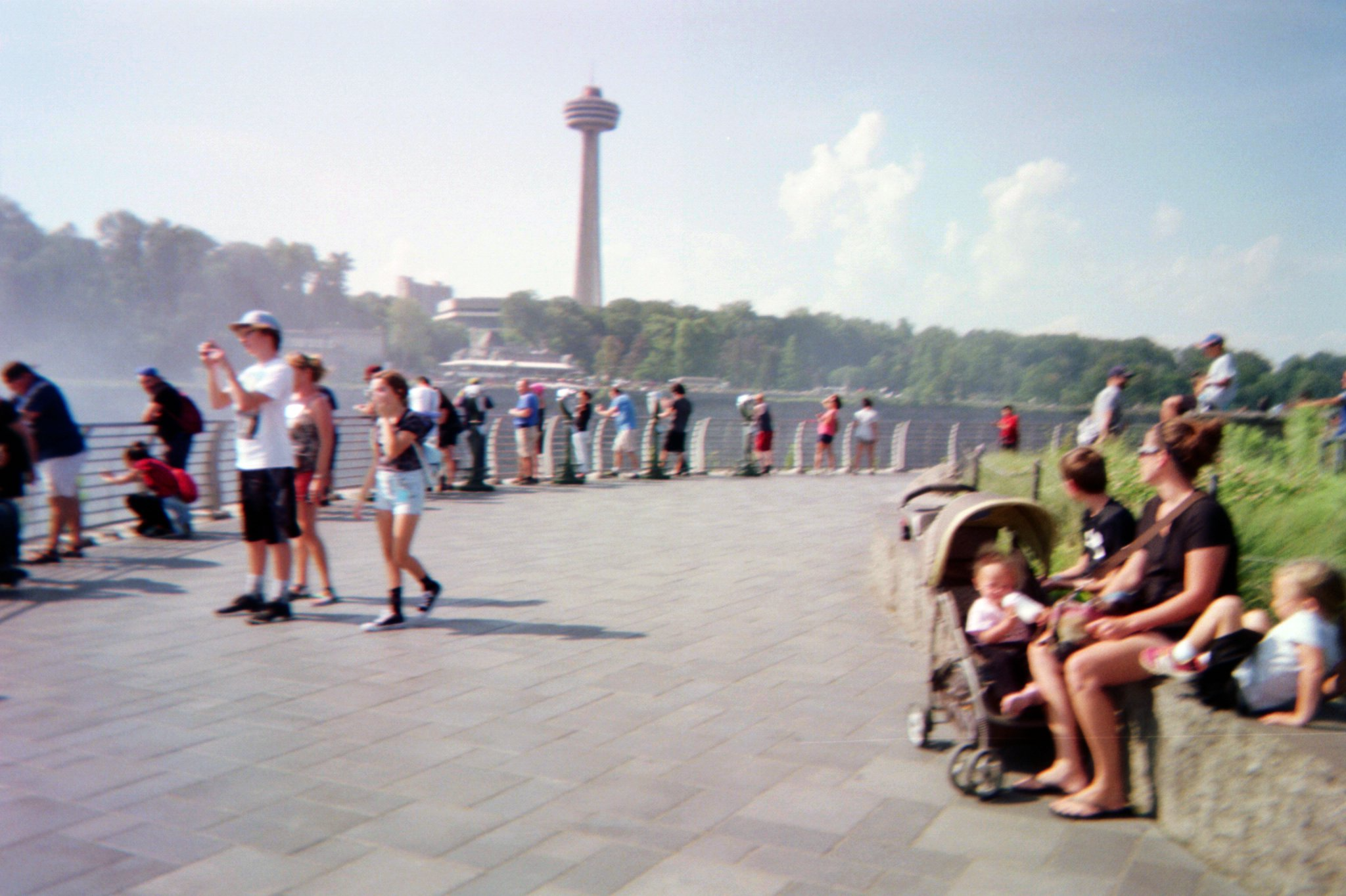 Many visitors come to Niagara Falls and snap photographs of the Falls using mobile phones.