Wedgwood made in England beginnings

Wedgwood made in England story begins with the descendants of Gilbert Wedgwood. Four of Gilbert Wedgwood’s descendants became potters. Josiah’s cousin, Dr. Thomas Wedgwood (1695-1737) was known for his salt-glazed ware. Josiah’s uncles, John and Thomas, were the first to employ travelers and to trade directly with London and Liverpool, instead of selling their ware to hawkers. They also invented pyrometrical beads for measuring the temperatures of their ovens. 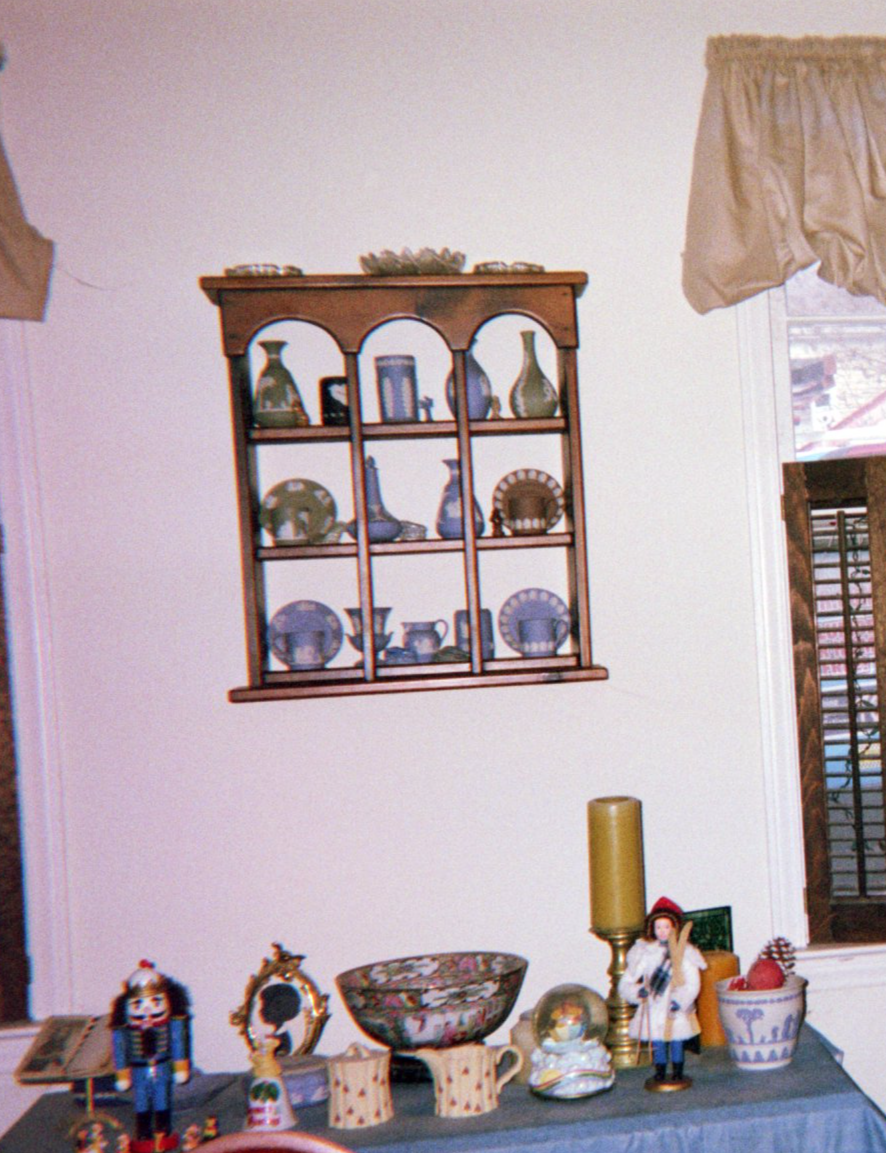 Reproductions of Wedgwood made in England Jasper ware teacups, saucers and vases on display.

Josiah Wedgwood was nine-years-old when his father passed away in 1739. He left school to start work under his eldest brother, Thomas, who had succeeded as “master” at the Churchyard Works. Five years later he became his brother’s apprentice, to learn the “Art, Mistery, Occupation or Imployment of Throwing and Handleing.”

In the second quarter of the eighteenth century, much technical progress had been made with Wedgewood made in England and sales had increased.

In 1750, methods of production were still primitive and the district was isolated. Burslem, the only town, had five shops. Buff and white clays from Dorset and Devon, flint and other materials were shipped to Chester or Liverpool and carried to North Staffordshire partly by pack-horse and partly by river.

At the end of his apprenticeship in 1749, his brother Thomas refused to accept Josiah as a partner. Since he could not work with his brother, Josiah had to find a partner outside his own family. In or about 1752, he went into partnership with John Harrison, a local tradesman and the son of a banker, who had acquired an interest in the pottery works of Thomas Alders at Cliffe Bank. However, this partnership didn’t last long.

In 1754, he entered into a partnership with Thomas Whieldon of Fenton, a potter of distinction and taste who had built up a good business. The clauses of the agreement between the two men and later correspondence show that Wedgwood was free to pursue his research work. He wasn’t obligated to reveal to Whieldon how his results were achieved. Recent excavations at Fenton Vivian, new Fenton Low, have revealed many examples, in a wide variety of styles, of these early Whieldon-Wedgwood wares.

It was in the manufacture of “useful” wares that Wedgwood first made his name. For several years after the dissolution of his partnership with Whieldon, he devoted his experiments to the production of a cream-colored, fine earthenware. By 1763 he had invented what he described as “a species of earthenware for the table, quite new in appearance, covered with a rich and brilliant glaze, bearing sudden alterations of heat and cold, manufactured with ease and expedition, and consequently cheap.”

Queen Charlotte commissioned Josiah Wedgwood to manufacture a type of ware that had not been Wedgwood made in England.  The Queen’s subsequent orders included a set of cream-colored earthenware. She was happy with her purchase. According to Josiah, she commanded that all Wedgwood ware of this nature was to be called Queen’s Ware. This ware was decorated, as it is today, by printing or painting with enamel colors or by a combination of both processes.

Wedgwood made in England as we know it today

The first ornamental ware to be developed by Wedgwood was “Black Basalt’. It was a refinement of a cruder material known to Staffordshire potters as “Egyptian Black”. This new black was richer in hue, finer in grain, and smoother in texture than any previously made. Josiah used it both for “useful” ware and for large relief plaques, vases, busts, medallions, seals and small intaglios. It was also the background on which he executed classical encaustic paintings from a special palette of enamel colors. When these were fired the surface became matt, and closely resembled that of the Greek and Etruscan vases.

Jasper, the most famous of Josiah’s inventions, first appeared in 1774. Josiah undertook many experiments before Jasper was invented. He regretted that he had not kept his earlier trial pieces, although thousands of others have been preserved.

More examples of Wedgwood made in England Jasper ware on display.

Jasper is an unglazed vitreous fine stoneware. It has been made in several shades of blue, green, lilac, yellow, maroon, black or white. Sometimes one piece combines three or more of these colors. Some of the finest examples of Jasper were made of one colored body “dipped” in another color. The edges were polished and beveled so that the base color showed through. The white classical reliefs on a colored ground are still made today from molds made from the originals.

Wedgwood prized Jasper above all his productions. He knew the labor of its invention and the difficulty of its manufacture. Pottery collectors have valued it both as a technical triumph and as a unique ornament to display in cabinets and on shelves.

Wedgwood’s replica of the Barberini or Portland Vase stands out as the most interesting and memorable of all Jaspar pieces. This vase (now in the British Museum) was made in classical times, probably about A.D. 50 possibly in Alexandria. The most skilled glassmakers of the Roman world were located in Alexandria.

It is made of deep blue glass, so dark in texture as to appear black and opaque. On this blue background a casing of opaque white glass was put, and then the white layer was carved into figures in shallow relief. A technique requiring extreme skill left the background exposed in many places.

After years of experiment, Wedgwood succeeded in reproducing the color and surface texture. When in 1790, he presented his first replica for criticism, it received the approbation of Sir William Hamilton and an appreciation from Sir Joshua Reynolds, President of the Royal Academy. Sir Reynolds wrote, “I can venture to declare it a correct and faithful imitation, both in regard to the general effect, and the most minute detail of the parts.” The number of Wedgewood made in England copies of the Portland vase is uncertain.

In adapting classical designs for his Jasper ware, Wedgwood was following both his own inclination and the best taste of the time. In 1759, when Wedgwood started his own factory, Robert Adam introduced the series of designs which produced a revolutionary change in fashionable taste from the Palladian and rococo to the neo-classical. Pottery was predominantly rococo in feeling.

Wedgwood incorporated the new ideas in ceramic terms. He changed the fashion in the pottery world as much as Adam had changed it in interior decoration. Adam’s plaques and medallions in low relief, with white classical figures on a pale-colored ground, such as can be seen at Mellerstain, Osterley, Harewood or almost any other Adam house, were the inspiration for Wedgwood made in England adaptation.

Many Wedgwood made in England Jaspar pieces were designed for special decorative purposes, to decorate walls, chimneypieces or furniture. The oblong plaques with friezes, nymphs or goddesses, were designed for chimneypieces. Two of these survive in Adam houses, and many others in buildings by other late eighteenth century architects following the Adam idiom.

Josiah Wedgwood appreciated the value of the contribution that art can make to industry. He was successful in securing the services of the leading painters and sculptors of his day. He was an artist in his own right. He had an appreciation of shape and understood he importance of restraint in design and ornament. The graceful outlines of his Queen’s Ware and his simple border decorations, evolved by his own modelers and painters, are more highly appreciated now than they were in his own life-time.