Carousel history started in the 6th century with the first fair rides that spun their riders in ancient Byzantium, known today as Istanbul. The carousel machine invention had a rotating center with poles that reached outward.  Baskets were tied to these poles. People sat in these baskets while whirling around the pole. 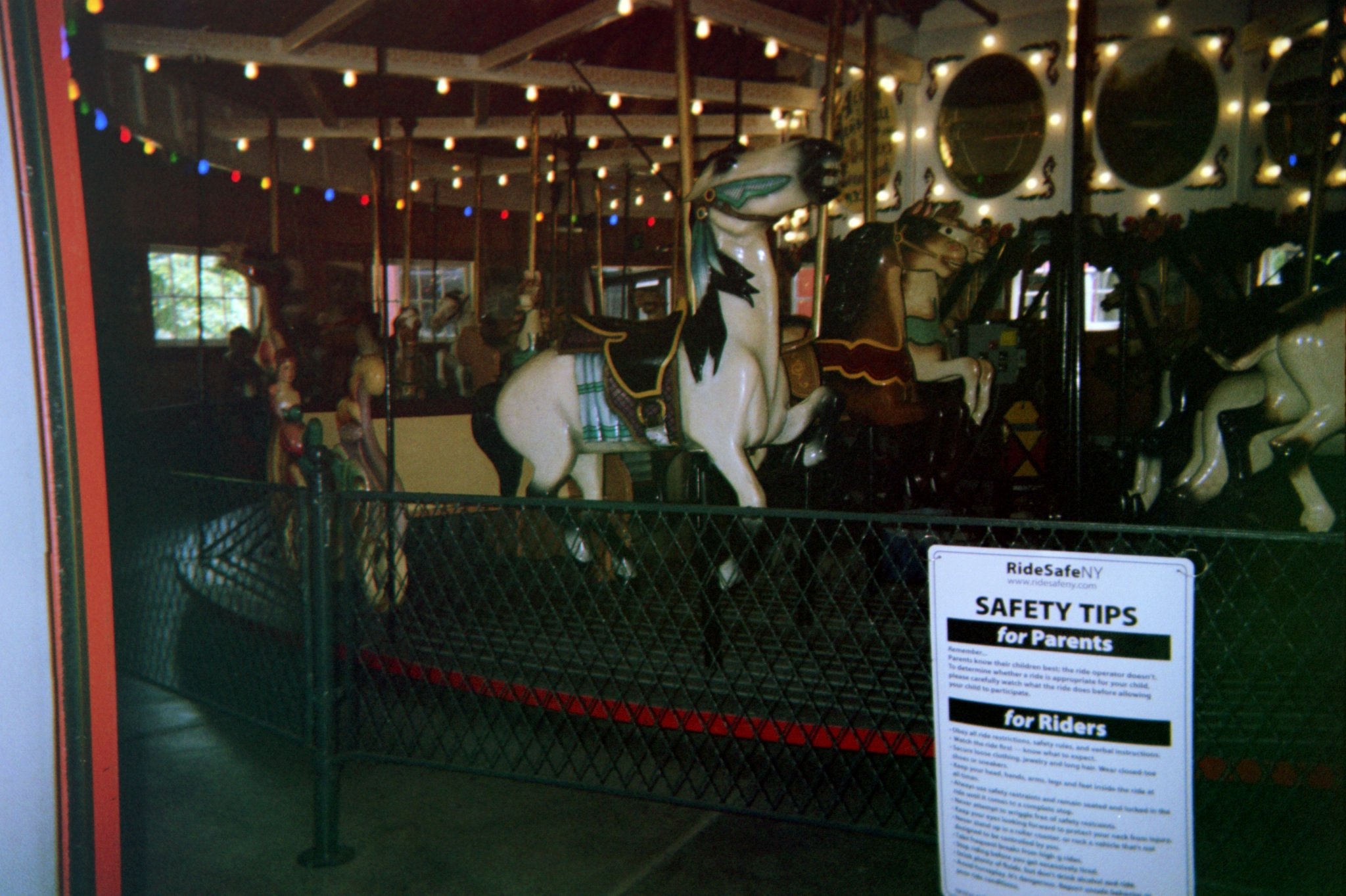 With the fall of the Western Roman Empire, Europe was split into many kingdoms. These kingdoms competed for wealth and land. It was a time when war was the center of life. The whirling baskets around a pole concept ties into the 12th century. Horsemen in the 12th century began using this device for battle training in the earlier days of carousel history.

According to the International Independent Showmen’s Museum, the word “carousel” originates from “little war,” a training game that originated with Arabian and Turkish warriors in the 12th century. The game was a serious exercise in horsemanship. It was a way for them to practice their cavalry riding skills for combat training. Horsemen would play jousting competitions, using the same concept from centuries before. Initially, they would ride on horses in a circle. The goal was to knock off the man’s hat who was holding a stick. It prepared and made them stronger for war.

Turkish and Arabian warriors would throw breakable clay balls of perfume at their opponents while riding on the poles in a circle. The hit horseman would lose and be covered with perfume. The only way to he could rid himself of the fragrance would be to wash the perfume off. Both the jousting and ball-tossing competitions were called “the little battle.”

The Spanish and Italian words for “little war” were garosello and carosella. These words translated into the French word “carousel.” The French improved on the “little war” training game by developing a device to practice for carousel competitions in the 17th century. This was the direct ancestor of the fairground ride.

To prepare for these competitions, a practice device was created. Legless wooden horses suspended from arms on a central rotating pole were featured. The pole was rotated either by human, horse, or mule. The horseman mounted on the wooden horses practiced games such as spearing a hanging ring covered in bright ribbons with their jousting lances.

King Charles VIII was the first French king to elevate these games to a regal affair. The greatest example of this would be Le Grande Carrousel, of 1662. Developed by King Louis XIV, Le Grand Carrousel included other games, food, and many forms of entertainment.

The popularity of the merry-go-round began in the 18th century when carousels were introduced as fairground attractions in Europe and England. The war training was eliminated in this era of carousel history. The rotating pole with chains was converted into a fun attraction. 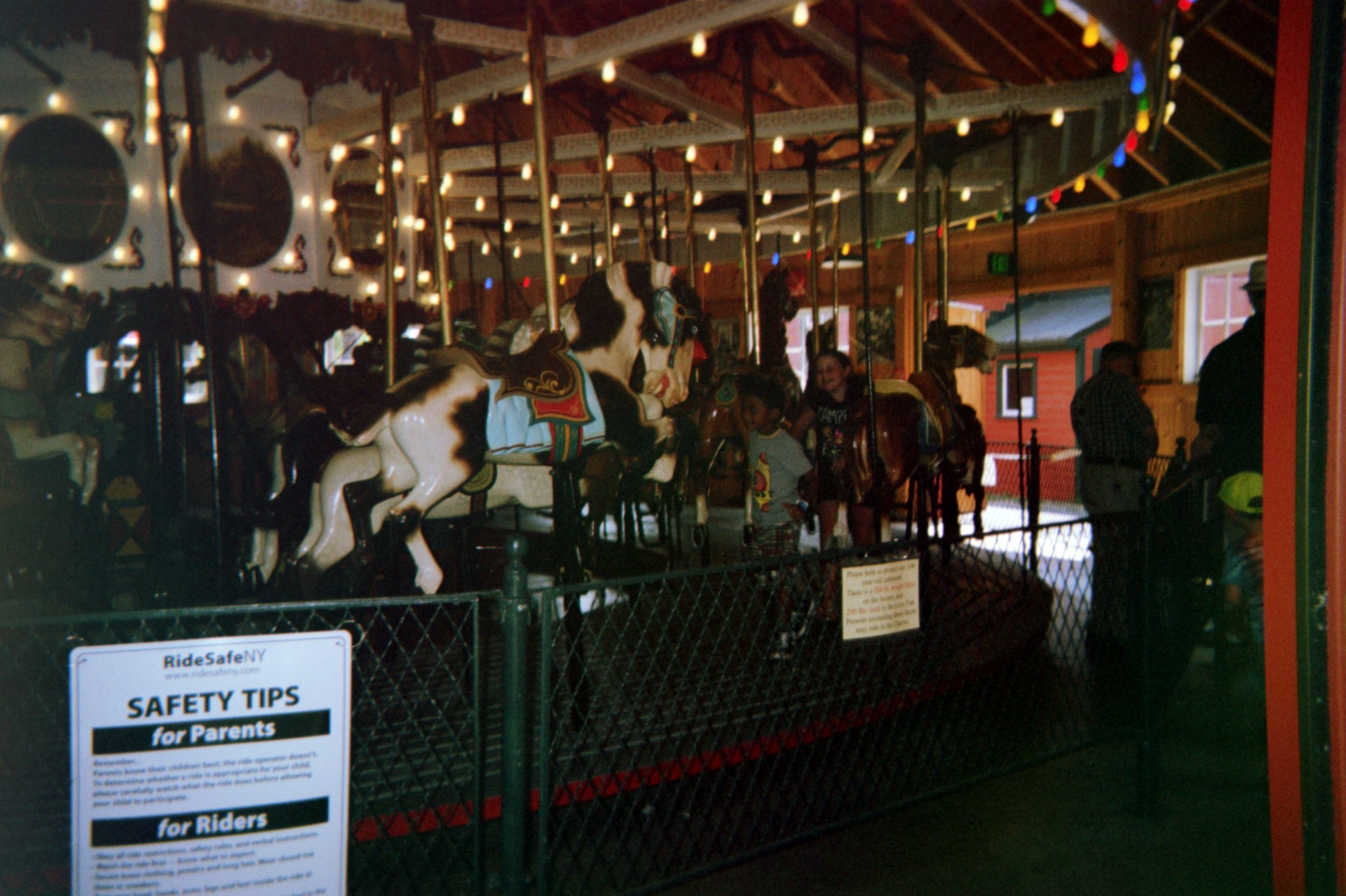 Families in the carousel business would craft the animals from wood during the winter. During the warmer months they would travel from one fair to another. The carousel was mounted on a wagon and operated at different venues.

These 18th-century merry-go-rounds in carousel history didn’t have platforms with horses. Instead, they had seats that hung from chains. The gallopers were lightweight and small. A man or mule could operate the machine.

The carousel wasn’t safe. As the machine increased speed, the centrifugal force on the horses often caused the riders to fly outward. Although it didn’t move as fast as the carousels we know today, it was still enough to slide people off. It started to become known as the “flying-horses.”

Other names for the carousel are merry-go-rounds, jumpers, horseabouts and gallopers. These carousels became popular for affluent families in Europe during the 18th and early 19th centuries of carousel history.

In the 19th century, European carousels were remodeled to have platforms with figures fixed to the base. Newer carousels were called dobbies and still rotated with chariots and animals. Instead of the free-flying horses and seats on the earlier versions, the 18th-century carousel figures were pole-mounted.

Carousels added platforms and planks that extended from the top of the rotating center. The planks would extend outward over the animal figures. Both would connect to a pole. The poles included a bearing halfway down to keep them from shifting while the ride was in motion.

In 1860, Gustav Dentzel arrived in the United States at age 20 from Germany. He quickly became the pioneer of the modern American carousel. He started his early years in Germany making cabinets, then changed his career to include building steam and horse-powered carousels once he arrived in the states.

The first steam-powered carousel was invented by Thomas Bradshaw in 1861. It was a part of the Aylsham Fair. The introduction of steam power is one of the biggest steps toward the development of modern carousels.

Frederick Savage began making his carousels in 1870. He invented the classical mechanism that made carousel horses go up and down like they are galloping. Engineers such as Frederick Savage took designs from agricultural equipment to create a reliable and durable ride. The creation of steam powered machines allowed for faster rides that could turn a profit.

The Industrial Revolution helped to expand the popularity of carousels in the 1880s. The carousel industry was a thriving trade in carousel history. Amusement parks were a profitable investment as people moved from rural areas to the cities. In those days, amusement parks were called “trolley parks” because they were often built by streetcar businesses trying to pull in weekend and late-night traffic.

When modern carousels crossed the Atlantic, they became very popular in the United States until the beginning of the Great Depression. When the Depression passed, they slowly returned, but were never as popular as they once had been earlier in carousel history. Today, there are many variants of carousels and few from the golden era still work after reparations. 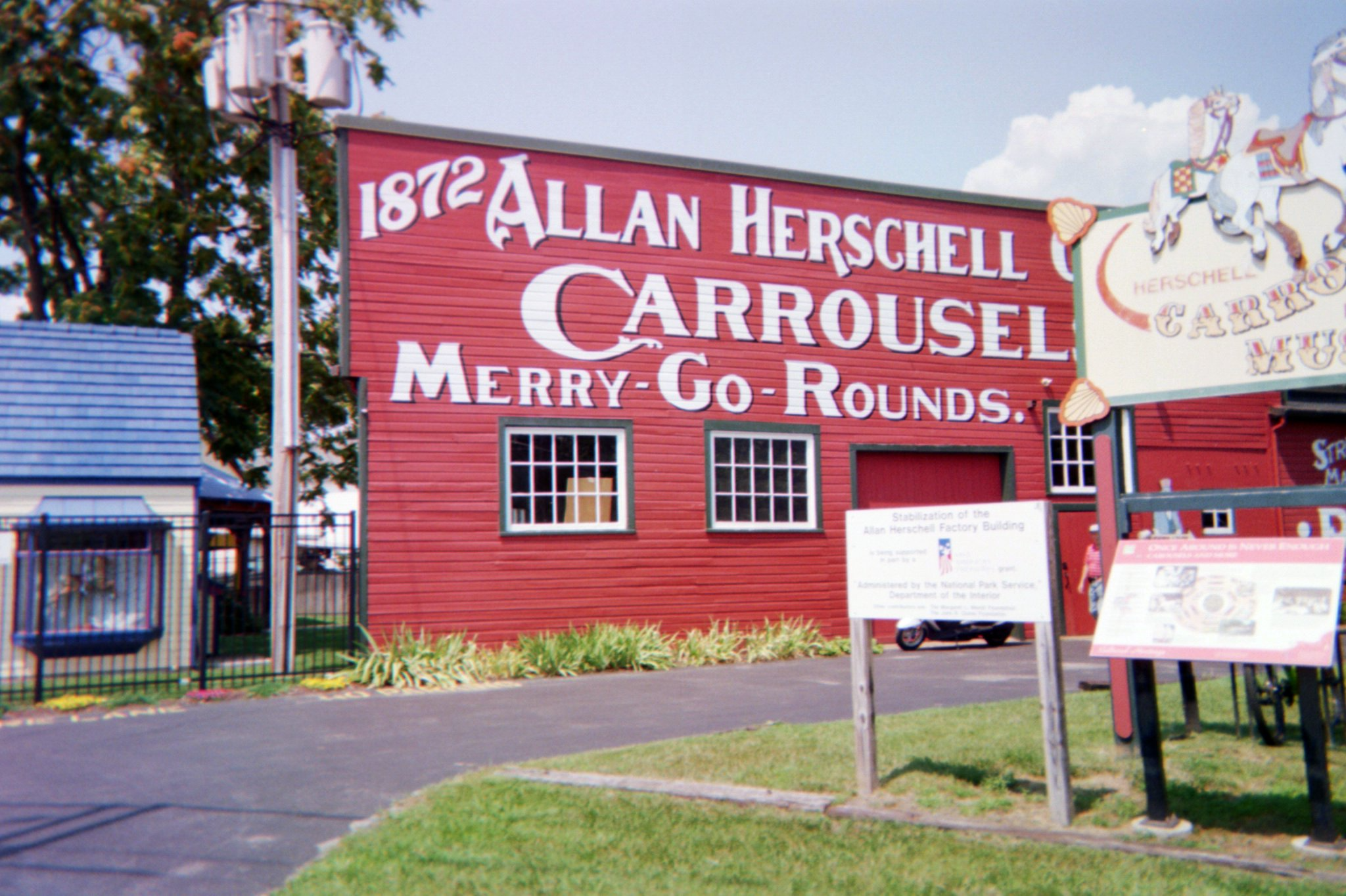 The Allan Herschell Company specialized in producing portable machines that were used by traveling carnival operators. The company produced over 3,000 hand carved wooden carousel that featured striking yet simple horses.

A major employer in the community, the Allan Herschell Company had a worldwide reputation for quality rides. Carousels from this company were shipped throughout the United States and Canada, as well as to all parts of the world, including South Africa, India, Tahiti, and Mexico.

Of the 148 antique, hand-carved wooden carousels still in existence in the United States and Canada today, 71 were manufactured in North Tonawanda in one of the four Herschell companies. The Allan Herschell Company had a major influence on the development of the American amusement ride industry. 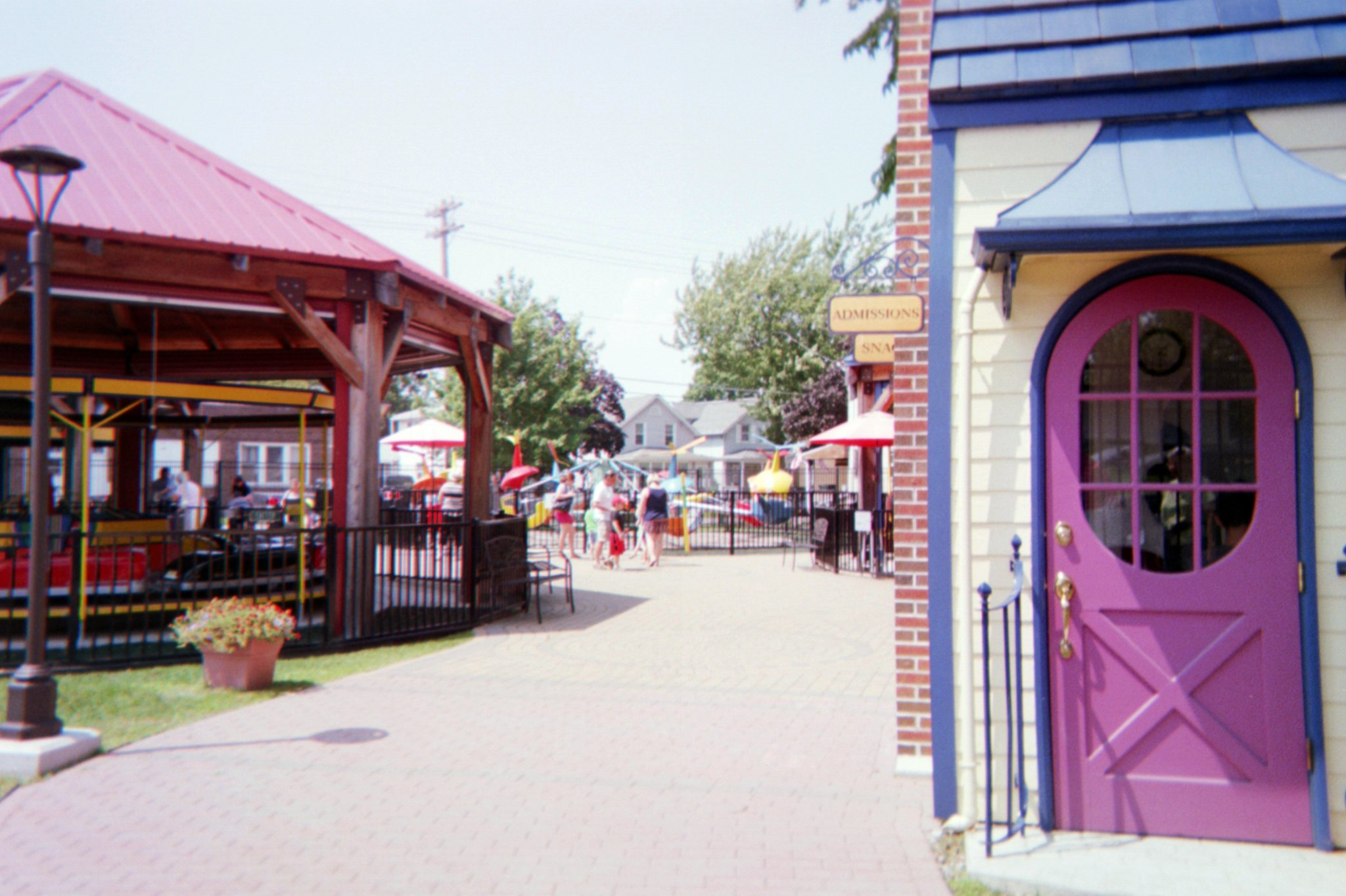 Specialized rides for kids in "kiddieland."

Over the years the Allan Herschell Company expanded its line of amusement park rides and pioneered such concepts as “Kiddieland,” a specialized group of rides designed for small children. It also introduced adult thrill rides such as the Twister, the Hurricane, and the Sky Wheel, a double Ferris wheel nearly 90 feet tall. Much of this growth occurred under the ownership of John Wendler and his family, starting in the 1930s.