National parks in Virginia are excellent places to visit to reconnect with the past. Virginia has many important battle sites that are nor preserved as historical parks. Jamestown was the first permanent English settlement in North America. George Washington, Thomas Jefferson and James Madison were born in Virginia. The next time you visit one of these historical parks in Virginia take along a mobile phone to capture images and text your discoveries to friends and families. 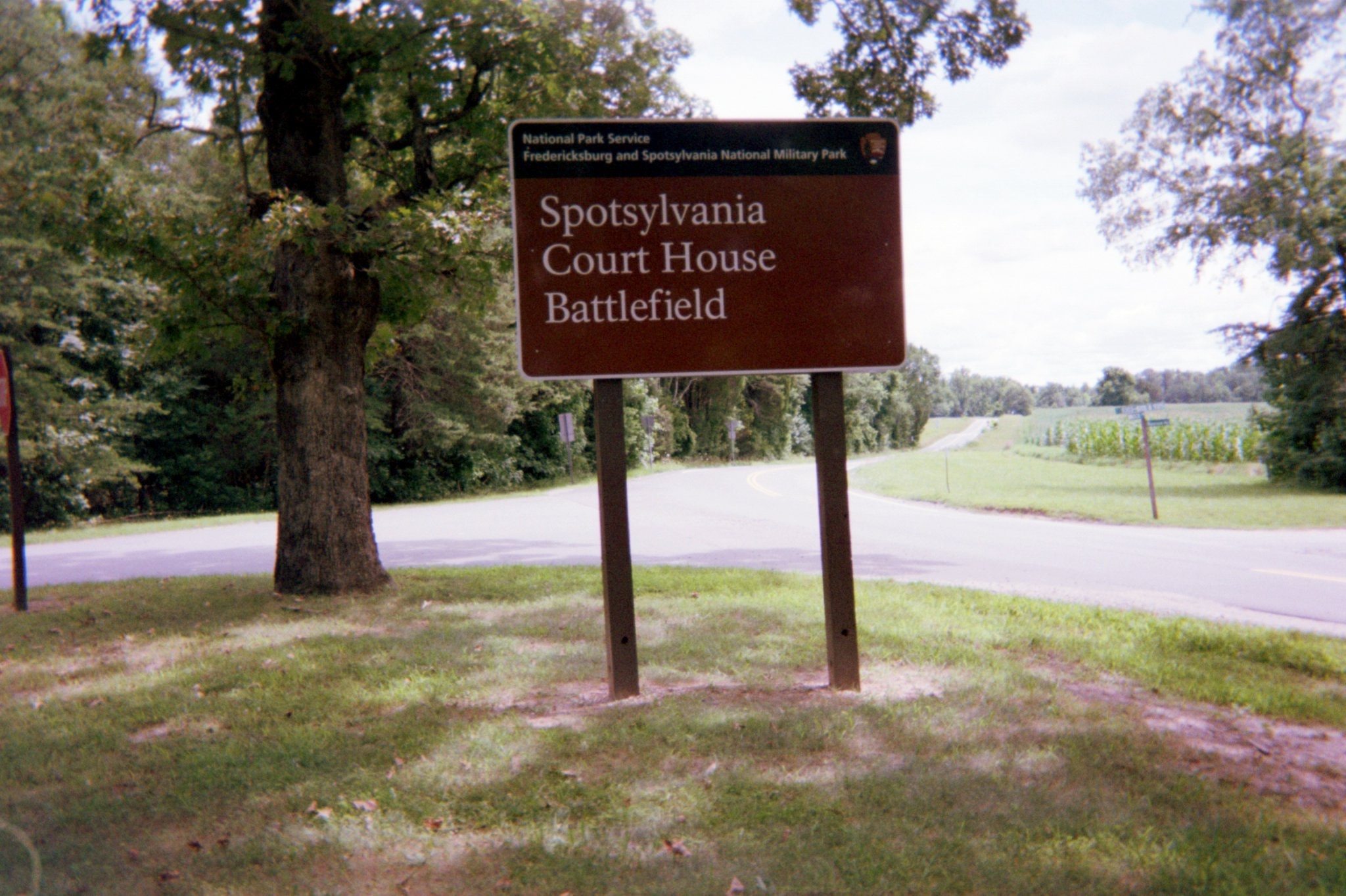 One of the many national parks in Virginia.

Visitors can experience the site of the 1607 settlement that became England’s first successful colony in America at one of the national parks in Virginia. There has been extensive archaeological work at Jamestown. The remains of the colonists’ original fort from 1607 was discovered. Other archaeological findings include sites of other structures, wells and burial places. The Historic Jamestown Visitor Center and the Archaearium museum display some of the hundreds of thousands of artifacts that have been recovered in the area. There are exhibits on topics such as the role of Native Americans and Africans in the settlement’s history.

The Yorktown Battlefield is the site of the event that eventually led the colonies to full independence from Great Britain. On October 19, 1781, the British under the leadership of General Charles Lord Cornwallis surrendered to the combined American and French army under the leadership of General George Washington. A new nation called the United States was born. The Yorktown Battlefield Visitor Center shows an orientation film, “The Siege at Yorktown,” and offers museum exhibits that feature Lord Cornwallis’s campaign table and George Washington’s tents.

The Cape Henry Memorial unit of one of the national parks in Virginia marks the landing place of the first Jamestown settlers in 1607. It includes a memorial cross, interpretive panel and a statue of Admiral de Grasses, the French naval commander who aided colonists at the siege of Yorktown. This memorial is located at Virginia Beach.

George Washington was born in Virginia along Pope’s Creek, near the Potomac River, in 1732. His birthplace was near land that had been settled by his great-grandfather in 1657. The house where Washington was born burned in 1779 and was never rebuilt. No documentation exists to show what the house looked like. A “memorial house” of locally made bricks was built to honor Washington on the 200th anniversary of his birth. It was based on design that would have been typical for a well-to-do Virginia family of the early 18th century. In 1931, the actual remains of Washington’s birth home were discovered. The outline of the foundation is still visible today.

The visitor center of the George Washington Birthplace National Monument features exhibits and a film on Washington’s life. The memorial house is furnished with period items and tours are available. The Living Colonial Farm showcases heritage livestock and tobacco plants similar to ones the Washington family might have planted. During special events, costumed interpreters conduct activities typical of pioneer times at one of the national parks in Virginia.

Red Hill Patrick Henry National Memorial is the final home of “the voice of the Revolution.” Patrick Henry was one of the Founding Fathers of the United States. He is known for his speeches in support of American independence. His most famous speech was given March 23, 1775 during the Second Virginia Convention in Richmond. “Give me liberty, or give me death” is still remembered today as the phrase that called for military action against the British. 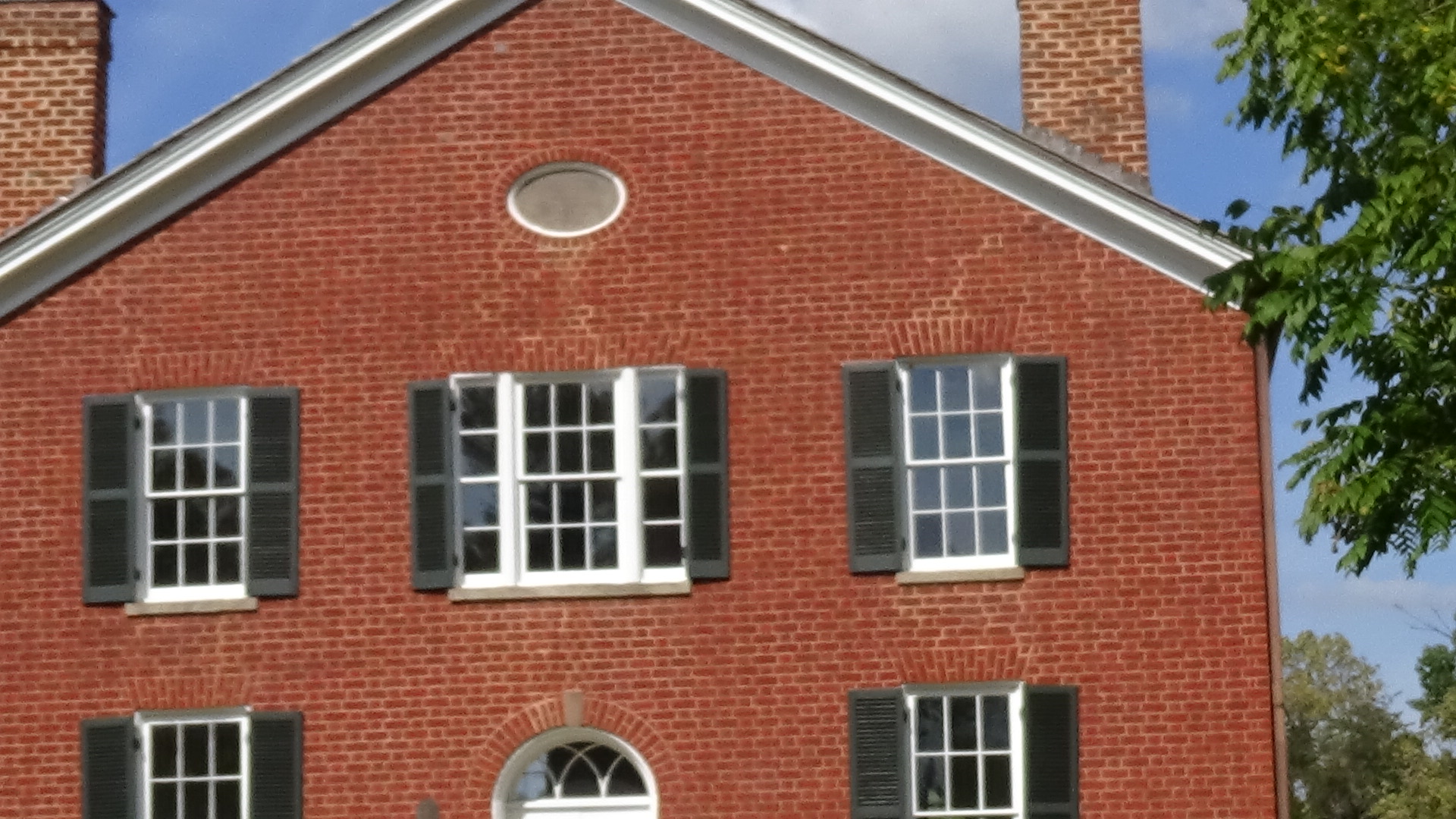 An example of historic court house architecture in Virginia.

Patrick Henry was a five-term Virginia governor who also served in the state legislature for 25 years. He was a proponent of states’ rights and individual freedom. A member of the “anti-federalist” faction, he was instrumental in the approval of the first ten amendments to the Constitution, known as the Bill of Rights. At age 57, Henry moved to Red Hill, a 2,920-acre tobacco plantation near the Staunton River. He lived in a simple 1 and ½ frame house until his death in 1799.

Visitors can tour the reconstructed house and other buildings of one of the national parks in Virginia, including Henry’s original law office, a detached kitchen, smokehouse and cabin that was home to enslaved workers. Henry’s grave site features a monument inscribed with the words “His Fame His Best Epitaph.”

Historic battlefields are part of national parks in Virginia

The first major battle of the Civil War occurred on July 21, 1861 near a Northern Virginia creek named Bull Run and the important railroad junction at Manassas. Although Union troops gained an early advantage, the arrival of Confederate reinforcements turned the battle into a rout. Union soldiers retreated back to Washington in near panic, impeded by the carriages of spectators. More than 800 combatants were killed and more than 2,500 wounded. Both sides then realized the war would be longer and bloodier than expected.

A much larger battle at the same location also ended in a Confederate victory in late August 1862. The triumph by General Robert E. Lee’s Army of Northern Virginia marked the high-water mark of southern military success in the Civil War.

Manassas National Battlefield Park is one of the national parks in Virginia that preserves the land on which these important events took place. The park’s Henry Hill Visitor Center features historical exhibits, artifacts, memorabilia, an interactive battle map and a film entitled “Manassas: End of Innocence.” Outside the center, a one-mile self-guided trail focuses on the First Battle of Manassas. A driving tour includes stops at important locations of the Second Battle of Manassas.

The recently opened Brawner Farm Interpretive Center provides orientation to the Second Manassas battlefield and includes a fiber-optic battle map and exhibits about the Second Manassas battle. A popular feature of the park is the equestrian statue of Confederate General Thomas “Stonewall” Jackson. This is one of the national parks in Virginia that offers various seasonal guided tours and living-history programs, including infantry and artillery demonstrations around the anniversaries of the battles. 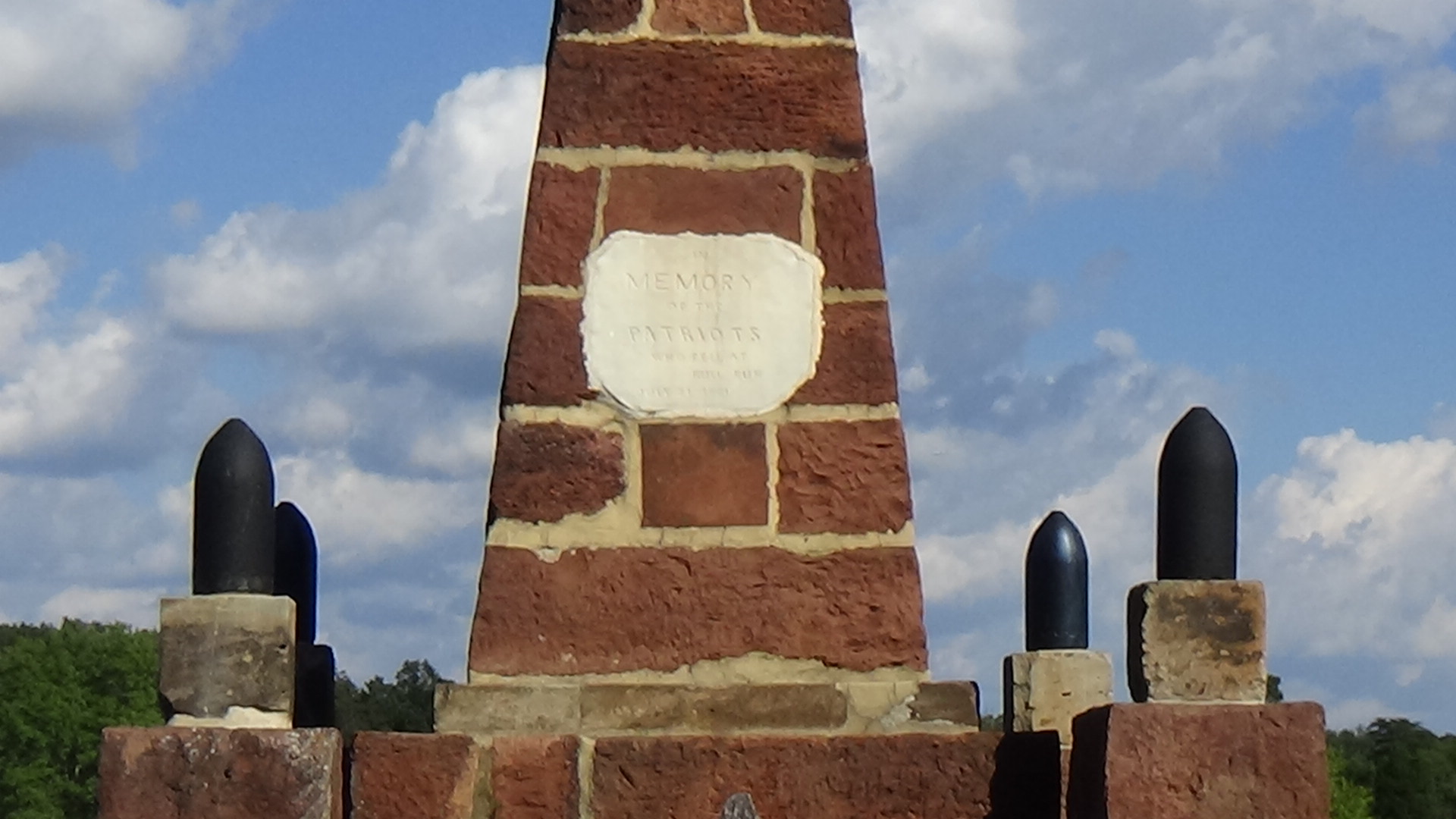 A closer look at the Manassas Battlefield national park memorial in Manassas, Virginia.

The Battle of Fredericksburg, in mid-December 1862, saw a Union attempt to cross the Rappahannock and advance south turned into a lopsided Confederate triumph that caused outrage in the North and jubilation in the South. General Robert E. Lee’s victory ended Union hopes of capturing the Confederate capital of Richmond until much later in the war.

The May 1863 Battle of Chancellorsville is often called “Lee’s greatest victory,” a confrontation in which he used risky maneuvers to defeat a much larger Union force. The Confederates suffered a crucial loss when “Stonewall” Jackson was mortally wounded by friendly fire.

There are no visitor centers at Wilderness and Spotsylvania Battlefields. However, there are interpretive displays and historians are present during summer and on weekends in spring and early fall. These battles, fought in May 1864, were part of Union General Ulysses S. Grant’s efforts to pressure Lee and push his forces southward. Casualties of the various battles are interred at Fredericksburg National Cemetery, Fredericksburg City Cemetery and adjoining Confederate Cemetery and Spotsylvania Confederate Cemetery.

In June 1864, Union General Ulysses S. Grant changed tactics in his campaign against the forces of Confederate General Robert E. Lee. Grant aimed to capture the Confederate capital of Richmond, Virginia, by taking control of Petersburg, 25 miles south, a vital transportation hub and link in the supply route to Richmond.

Grant’s direct attack on Petersburg failed, so he repositioned his troops and began what would become the longest siege in American warfare. Constant attacks and bombardment caused Lee to abandon Petersburg in early April 1865, pursued by Union forces. The weakened Confederate Army couldn’t hold out long. Lee was forced to surrender to Grant at Appomattox Court House on April 9, ending the Civil War.

The Appomattox Court House National Historical Park is one of the national parks in Virginia and is the site of the final events of the Civil War. This historic Park offers visitors the chance to experience the setting of this event. It was the first step in reuniting a divided nation. The Park’s centerpiece is a reconstruction of the home of Wilmer and Virginia McLean, where the generals met. The parlor is furnished with both original and reproduction items. Original structures within the park include houses, cabins, offices, stores and the 1819 Clover Hill Tavern.

One of the national parks in Virginia visitor center is located in a reconstruction of the county courthouse at Appomattox. Many original artifacts connected with the surrender are on display, including the pencil used by Lee to amend the terms of surrender; authentic military uniforms; and a doll that belonged to the McLean’s seven-year-old daughter, Lula. 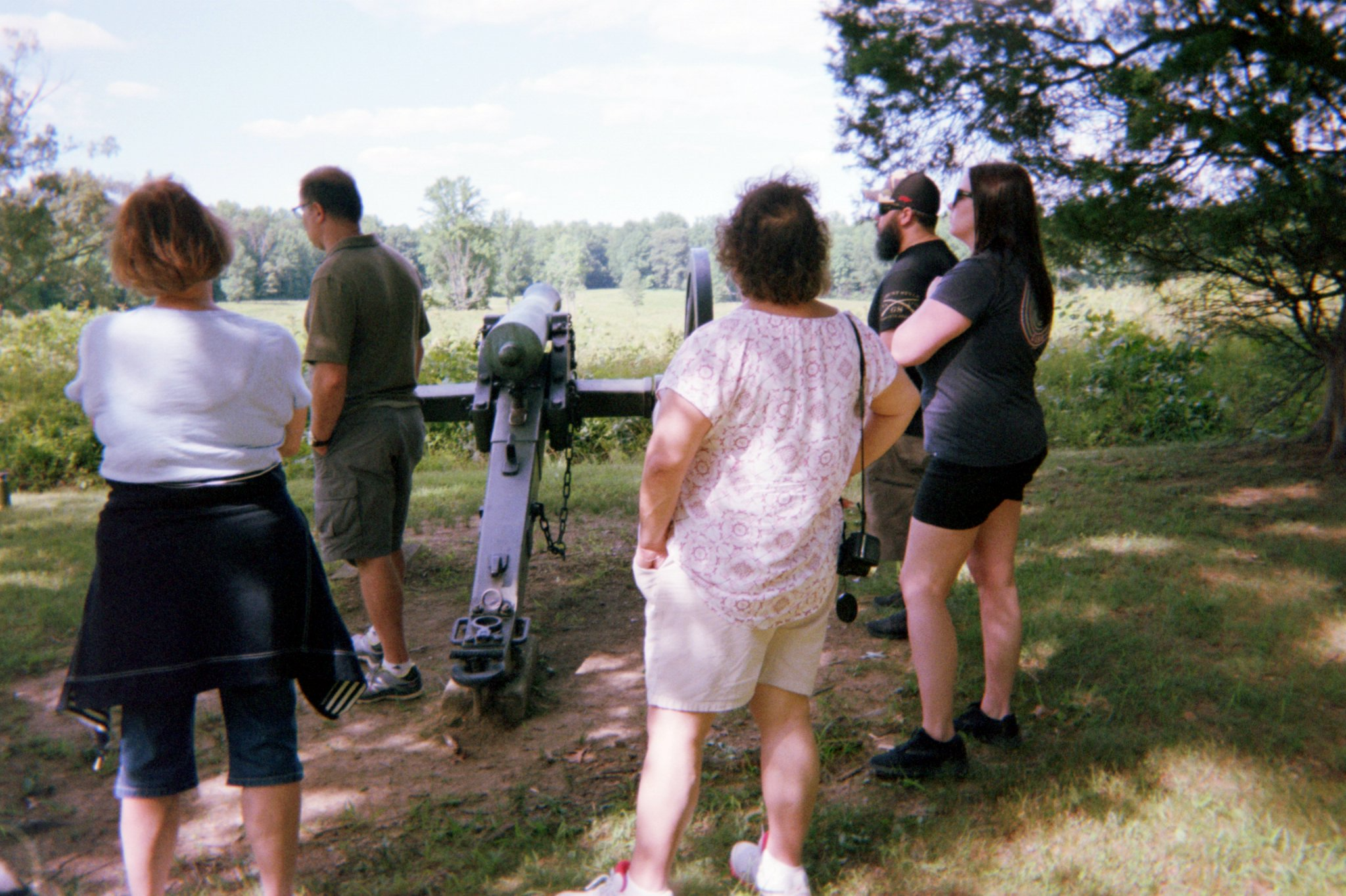 One of the many national parks in Virginia tours at the Spotsylvania battlefield.

Other historic places in Virginia

Located across the Potomac from Washington, D.C., the house remained Lee’s home (though it legally belonged to his wife) until the Civil War. Lee wrote a letter resigning from the U.S. Army at Arlington House on April 20, 1861. He left two days later to join the Confederate cause. He never returned to the house.

As cemeteries in the area filled with dead from the Union Army in 1864, the Federals appropriated the Lee property as the site of a new cemetery. The main purpose was to prevent the Confederate general from re-establishing the mansion as his new residence after the Civil War. In 1925, Congress designated the mansion as a memorial to Lee and has become one of the national parks in Virginia.

Booker T. Washington National Monument is located at the site of the Virginia tobacco plantation where Washington was born to an enslaved mother. The visitor center contains exhibits on the life, career and legacy of the man who once wrote, “I had the feeling that to get into a school-house…would be about the same as getting into paradise.”

The quarter-mile Plantation Trail passes reconstructions of buildings like those that would have been on the farm in the 1850s, including a reproduction of the kitchen cabin where Washington lived as a boy. The 1.5-mile Jack-O-Lantern Branch Heritage Trail explains how natural resources were used on the plantation in one of the national parks in Virginia.

The Maggie L. Walker National Historic Site portrays the home of America’s first African-American female bank president. Maggie L. Walker was born in Richmond, Virginia in 1864 to a mother who had been enslaved. She rose to prominence as the leader of an African-American fraternal and social organization. While serving as head of the Independent Order of St. Luke, she realized her dream. In 1903, she founded the St. Luke Penny Savings Bank, where depositors could “take the nickels and turn them into dollars.” She became the first African-American woman to charter and serve as president of a bank in the United States.

In 1904, the Walker family bought an 1883 house in the Jackson Ward neighborhood, the center of Richmond’s African-American business and social life. It was also a national historic landmark district. Walker lived there until she passed away in 1934. By this time, she had achieved prominence in many local, state and national organizations. She also served on the board of directors of the National Association for the Advancement of Colored People (NAACP). Visitors to the Maggie L. Walker National Historic Site can view exhibits and a film on her life in the visitor center. They can then take a guided tour of her home. This house has become one of the national parks in Virginia to visit.

The Appomattox Court House is one of the historic national parks in Virginia.